So, it finally happened. For the first time in my life, I have won something!
There I was, browsing Kristen J's Hopscotch The Globe's Facebook page again (as I often do), when I saw a call to post a picture that proves you are living your life: the contest Proof of Life. This contest is given out by something called Operation Unplugged.
Operation Unplugged is a Canada-based organization, which takes 8 technology-dependent people and unplugs them. Literally, I mean. No more phones, computers, tv. No more Facebook, Twitter, email, etc. These participants are guided on a coast-to-coast, challenge-based adventure through Canada's National Parks and National historic sites.
Operation Unplugged call on people to become more aware of the world around you, to enjoy it, to go out, explore. 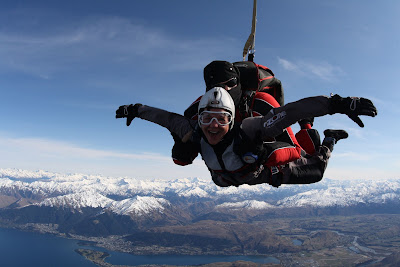 I stumbled upon this contest and decided to enter one of the pictures of my skydive in Queenstown, which was one of the moments when I really, truly felt alive. I posted this on Hopscotch The Globe's Wall, who reposted it on Operation Unplugged's wall.

And lo and behold, what happened? I just got notice from Kristen J that my pictures has been the winner for this week! I have won an Atmosphere gift voucher (which is a type of AS Adventure shop) and 1000 Operation Unplugged points. Wheeee!

But you know what? It doesn't even matter what I've won, if I can be honest - just the fact that I did, that my picture did, fills me with pride. It proves that, at least for a short while, I have lived!

Posted by Marie-Anne at 1:25 PM No comments: